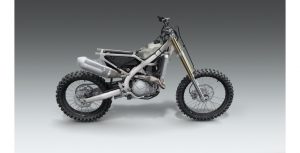 (1)  The triple clamps have been changed for more flex and the bottom triple clamp is now 6.1mm higher. The 49mm Showa coil spring forks have 5mm more travel (310mm) and the front axle has its stiffness increased. The shock’s piston has been enlarged and the shock spring is 200 grams lighter. 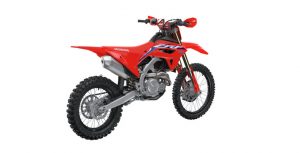 (2) The seat is shorter, lighter and 10mm lower at the back. Maintenance has also been simplified as the number of 8mm bolts on the bodywork has been reduced from 6 to 4 per side. The 2021 CRF450 is 70 mm slimmer (50 mm on the left side because of the lack of a left-side muffler, 20 mm on the exhaust side). 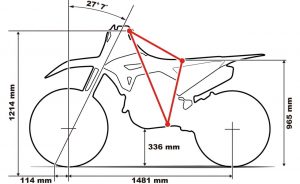 (4) The radiator shrouds are one piece instead of two plastic parts. The stock handlebars at Renthal FatBars. The top triple clamp has two bar mounts that allow the handlebars to be moved back and forth 26mm .

(5) The front brake caliper has 30mm and 27mm piston diameters and a 260mm wave disc is used. A rear single-piston brake caliper works in conjunction with a 240mm rotor.

(6) The frame weighs 1 pound, 9 ounces (700 grams) less than the 2020 frame. The subframe saves 11 ounces (320 grams). Torsional rigidity is unchanged, but lateral rigidity has been reduced by 20%. The aluminum swingarm has a new rigidity balance that is tailored to the frame, with narrower tubes. The Pro Link shock linkage rising rate also been revised. 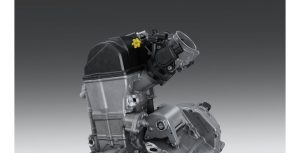 (7) There is a significant increase in peak power above 5000 rpm with more noticeable torque at low rpm. Some of this is because of the larger airbox, which is now easily accessible by removing the side panel. The engine has a new, lighter 46mm throttle body. It optimizes the efficiency in the intake tract and actively uses the latent heat of vaporization that arises in the intake ducts. 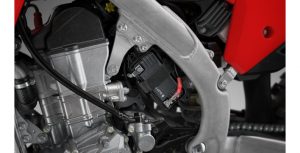 The all-new hydraulic clutch delivers reduced manual force. There is a smaller fuel pump and lightweight magnesium valve cover. The seat is now smaller and lower in the rear.

(8) The injector angle has been increased from 30° to 60°, which means that the fuel is sprayed in the opposite direction of the intake air. The decompression system is new and the counterweight is shifted from the right side of the camshaft to the left. 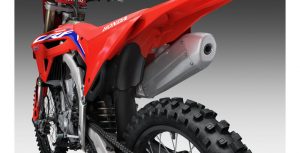 (9) The biggest change is to the exhaust system. The exhaust outlet is oval instead of round. The previous dual exhaust system has been replaced by a single pipe and muffler that is 2-1/2 pound lighter than the 2020 dual system. The manifold is also mounted 74mm closer to the center axis. 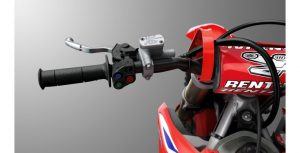 (10) The electronic controls (start control display, the EFI warning, the EMSB mode button, HSTC traction control button and the LED display) are located on the left handlebar. Pressing and holding the HSTC button for 0.5 seconds switches the system to the next mode, whereby a green LED display – one flash for mode 1, two flashes for mode 2 and three flashes for mode 3 – confirms the selection. The HSTC system can also be switched off completely. When the engine is switched on, the system uses the last selected setting. 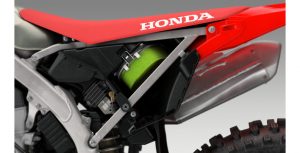 (11) The seat is now bolted up front with a bolt from each side (just below the rear of the gas tank). Speaking of the gas tank, it is still titanium, but it doesn’t have the cheesy black plastic tank cover anymore. 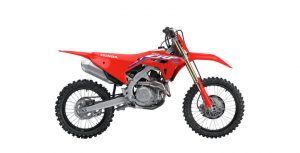 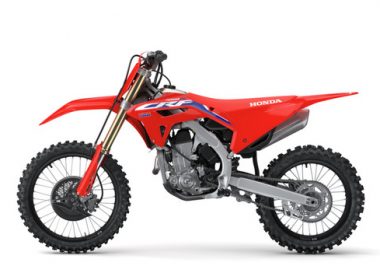 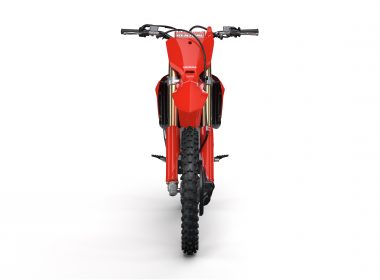 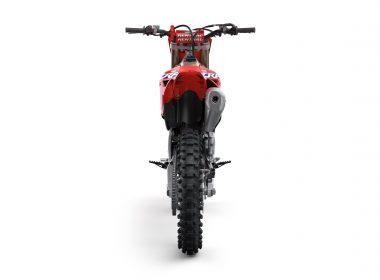 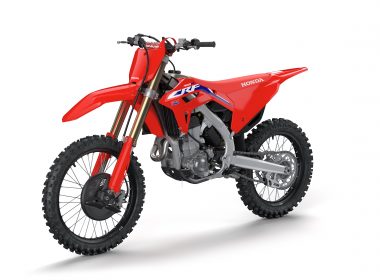 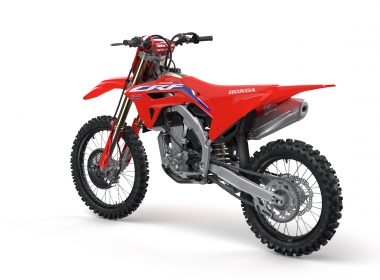